Bitcoin Mining Shares Back at $9

This week Chinese mining giant Canaan Inc. completed its initial public offering in the US for $90 million. The figure sounds impressive for the first time a Chinese company based on Bitcoin has been listed, however it is way less than the original valuation of $400 million in October.

Bloomberg reported that the mining hardware manufacturer sold 10 million American Depository Shares (ADS) for $9 apiece on Wednesday. An ADS is a USD denominated equity share of a foreign-based company available for purchase on an American stock exchange.

According to the official announcement last week, the Hangzhou based firm planned to raise $100 million by offering 10 million shares which were offered between $9 and $11 according to filings with the SEC.

Three Arrows Capital CEO Su Zhu reported that the shares actually opened at $13 but fell back to $9 by the end of trading.

Bloomberg added that the stock ended the day flat at a penny under, trading at $8.99. It added that there was a spike of around 44% which would have pumped prices to $13 initially. There was also a dip with the intraday low hitting $8.21 according to the Nasdaq. Friday’s trading will be interesting to watch, especially considering what is happening to Bitcoin prices at the moment. 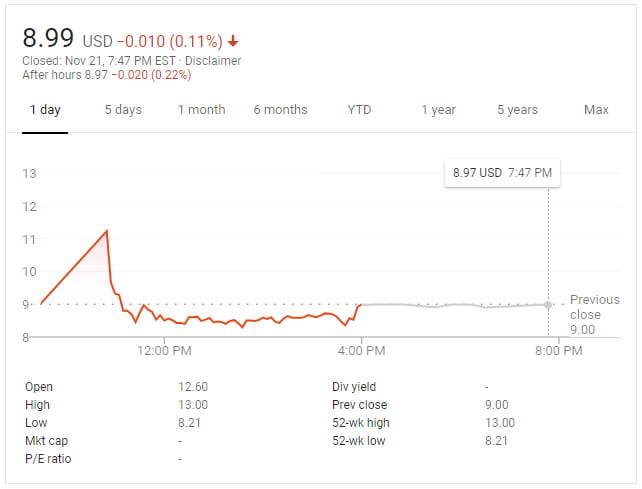 The lackluster first day’s trading could be a signal of fading interest in Bitcoin in general. So far this week the digital asset has dumped 11% as crypto markets shed billions.

The bears are back in play and general sentiment has entered the red zone with analysts now eyeing a short term bottom of around $6,000.

Even twitter engagement has fallen off as the number of Bitcoin related tweets hits a two year low. There has also been a lot of talk of miner capitulation so the timing of Canaan’s listing could not have been worse.

At the time of writing BTC had collapsed to $7,650 marking a loss of 4.5% on the day. Total market capitalization has shrunk by over $10 billion in 24 hours and is plunging towards the psychological $200 billion barrier. A fall through this could see a return to crypto winter levels at the end of last year as all this year’s gains get wiped out.

It will be interesting to follow Friday trading for CAN which is likely also to mimic crypto sentiment and turn south, below its opening price.

Things are not looking rosy for Chinese bitcoin mining giant Canaan after day one of trading and they could get far worse today. BTC has dumped almost 4.5% in 24 hours and crypto markets have shed $10...
Read More

The rise in price and interest for Bitcoin have generated a surge in mining facilities. But these facts have also made it hard for the average individual to make a profit from mining Bitcoin on his o...
Read More

The Board of Directors of leading Bitcoin mining firm, Bitmain today threatened ousted co-founder, Micree Zhan with legal action if he continues meddling with the company’s affairs. In what has ...
Read More