Bitcoin (BTC) price action in the past three weeks has raised concerns about the long-term outlook of the leading cryptocurrency. The digital asset has failed to maintain an upward momentum since late February and now risks reversing its 2020 bullish trend.

A large section of the crypto community is worried that the asset’s price may drop further after hitting a yearly low of $7,700 in recent weeks. This decline has wiped out a significant proportion of gains made after Bitcoin crossed the psychological barrier of $10,000 last month.

Bitcoin has failed to build any significant upward momentum after failing to break above multiple resistance levels recently. This is due to the mounting selling pressure in the market that continues to suppress prices.

Any further decline could be detrimental to investors and could have lasting effects on the entire crypto market.

Bitcoin is on the right side of history

Despite the growing concerns, history suggests that Bitcoin’s recent price action is within the expected range especially in the lead up to halving in May. The digital asset has exhibited similar behavior in its past two halvings and the current one is no exception.

History intimates that people tend to panic sell Bitcoin pre-halving and panic buy post-halving due to Fear of missing out (FOMO). Available market data shows a similar trend for the Nov. 2012 and July 2016 halving events. 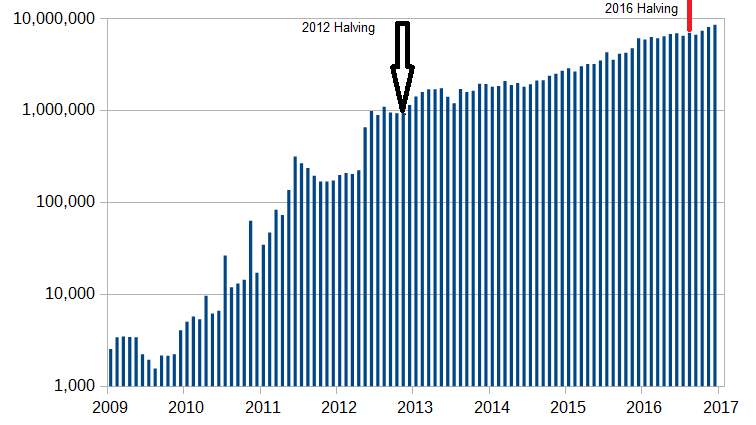 Bitcoin blockchain historical data in the above image shows that there was an increase in the number of monthly transactions prior to each halving. Notably, the monthly trading volume spiked higher in the 6 months prior to the first halving as compared to the second one.

In retrospect, the sharp rise in monthly transactions was potentially driven by fear, uncertainty, and doubt (FUD) surrounding the first-ever Bitcoin halving event. The FUD about what would happen to the cryptocurrency post-halving probably fuelled the selling pressure.

The trend-line for the daily trading volume also perfectly paints the historical performance of the digital asset. As seen from the above image, Bitcoin’s daily trade volumes rose in the periods leading up to both halving events.

In what may come as positive news, historical data shows that Bitcoin price rises steadily in the post-halving period.

The bitcoin price rose sharply in the post-halving periods as demand for the digital asset increased on both occasions as seen in the above image. What’s even better? Bitcoin hit a new all-time high price after each halving.

Bitcoin investors can now rest easy knowing that the asset’s price action is within expectations as FUD-driven selling pressure persists. They should be pleased that Bitcoin is following the pre-halving trend. If history repeats itself then, we are on course to reach a new all-time high in the near future.

During the crypto hype bubble and Bitcoin’s meteoric rise, speculation ran wild due to the incredible potential the emerging technology could bring to the world, if only the technology could find it...
Read More

Bitcoin has been through quite a roller coaster during this year. The digital asset had a decent beginning of the year followed by a huge bull run up to $13,970 by mid-2019. Bitcoin then started cons...
Read More

XRP, one of the most controversial cryptocurrencies in existence has been able to see a swift recovery since March 12, when the crypto and stock markets crashed. The lowest price of XRP was anchored ...
Read More

Just a few hours ago, Bitcoin saw a huge 20% crash down to $8,000 on most exchanges. More than $200 million in Bitcoin longs were liquidated within 25 minutes on BitMEX, however, bulls managed to bou...
Read More