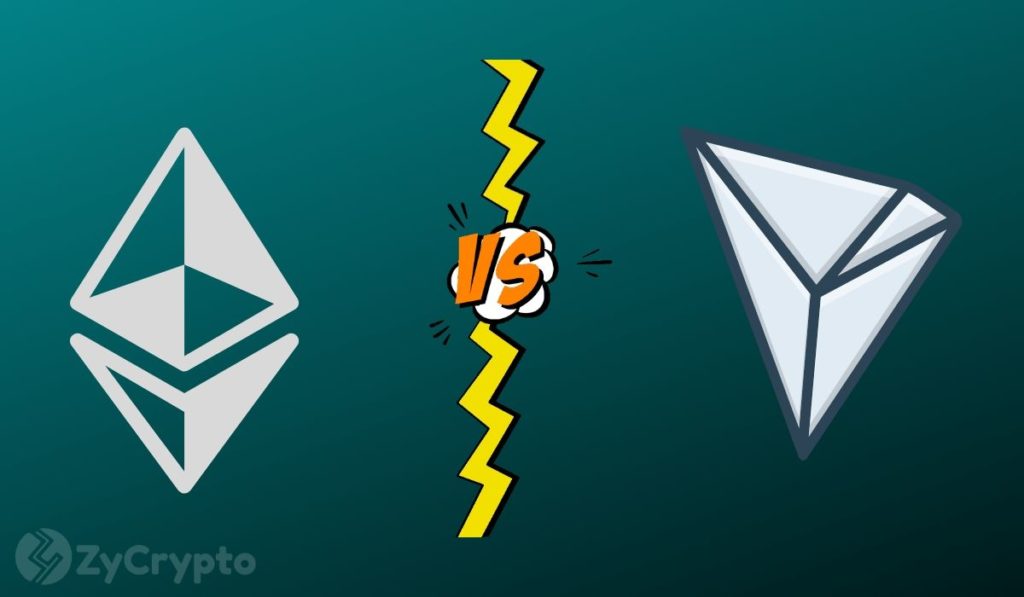 60% of the crypto community on Twitter think upcoming update, Tron 4.0 is way better than the long-awaited ETH 2.0, according to a Twitter poll conducted by Tron founder himself, Justin Sun.

With one day left before the poll is closed, the results could change as ETH 2.0 garners more votes, but Tron 4.0 is currently the clear leader.

Ethereum is the second-largest blockchain which is also the most active platform for smart contracts. Moreover, most of the cryptocurrencies in the crypto market are ethereum-based tokens.

Nonetheless, no coin on the crypto space is perfect, and Ethereum has had its fair share of problems over the years. The ICO-laden coin has experienced bottleneck scalability issues which even the co-founder Vitalik Buterin has admitted is a barrier to adoption. However, the token is looking forward to leaving all these troubles behind with the upcoming ETH 2.0 upgrade.

One of the so-called “Ethereum killers”, Tron (TRX), has been striving to take ethereum’s crown especially on the dApps category. Yet Ethereum is still the leading platform, despite the widely-known flaws. In another attempt to seemingly take on Ethereum, Tron’s Justin Sun recently announced the launch of Tron 4.0.

While he did not reveal many details, Sun noted that this new Tron update will entail features that are aimed at improving scalability, privacy, interoperability, and enterprise applications.

Some believe this is an attempt by Justin Sun to take a jab at Ethereum which has been postponing the ETH 2.0 update for the longest time. Ethereum’s transition to a Proof-of-Stake (PoS) consensus algorithm was postponed once again to sometime in Q3 of this year.

Unfortunately, Sun has acquired a bad reputation in the crypto space for hyping announcements and repeatedly putting himself in controversial situations. Last year, the most publicized Sun drama was the $4.5 million charity lunch with Warren Buffett which had so many twists.

Nothing has changed this year. Earlier this month, reports claimed that Justin Sun’s Tron was among the companies that received $2 million (17 mln RMB) coronavirus relief from the US government meant to help small businesses weather the impacts of the pandemic. This did not sit well with many considering Justin Sun splurged millions for a charity lunch with Buffett while some hard-working Americans are being denied the COVID-19 relief loans.

Also, Justin Sun is right at the center of controversy with Steem following a hostile takeover.

Crypto Community Trolls Ethereum For Not Getting Its Own Emoji

The crypto community on Twitter has united once again in an epic troll, this time aimed at Ethereum. What began as a simple question as to why the second-largest cryptocurrency doesn’t have its own ...
Read More

Why Collaboration Is Vital in the Cryptocurrency Space

The cryptocurrency industry is growing at a rapid pace, but there’s still a long way to go. With a market cap of around $275 billion, crypto is dwarfed by traditional assets like gold ($8 trilli...
Read More

Another week, another round of Crypto Tidbits. The past seven days have been volatile days for Bitcoin and other cryptocurrencies. The cryptocurrency on June 1st rallied past $10,000 for the first tim...
Read More

Justin Sun, who is that guy? In a few words : Justin Sun is the founder of TRON. He is really active in Twitter, mostly talking about TRON but he is still active in the developpement of the TRON p...
Read More

Tron Joins Bitcoin, Binance To Have Own Emoji On Twitter Ahead Of Major Upgrade

It’s a great week for the TRON community as TRX bags a Twitter emoji. It’s a fact that the crypto space is most active and thriving because of the many social media platforms that support cryp...
Read More