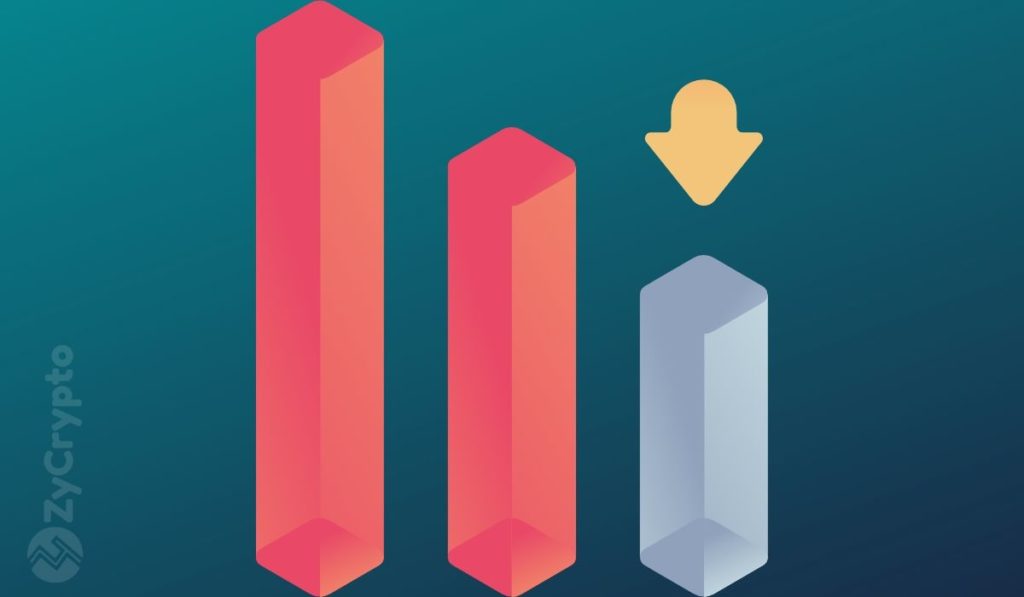 According to a new report from CryptoCompare, while Institutional options volume remained high, the volume on top-tier and low-tier cryptocurrency exchanges has decreased dramatically in June 2020, alongside crypto derivatives.

CryptoCompare’s Exchange Review for June 2020 examined the exchange landscape and found a shift to where volume is taking place in the crypto market.

Interestingly, CryptoCompare’s data designated the largest volumes for exchanges on March 13, April 30, and May 10. March 13 is the day after the global market flash crash. May 10 is the day before the 3rd Bitcoin halving.

Top-tier exchanges experienced a 35% decrease in volume but it should be noted that Binance still represented the highest volume among them at $41.8 billion, followed by OKEx at $40.6 billion and Coinbase at $6.86 billion.

Bitcoin to fiat volumes have also decreased. BTC to USDT trading, in particular, decreased by 56%. CryptoCompare lumped USDT together with fiat, but excluding the most popular stablecoin, it appears that the majority of crypto-to-fiat transactions and vice versa are connected to the US Dollar and the Japanese Yen.

Derivatives volumes have also dropped by 35.7% in June vs May, although June also represented the lowest Derivatives volume for 2020. The largest derivatives exchange continued to be Coinbase, followed by OKEx, Binance, BitMEX, FTX, Deribit, and CME. It appears from the data that the spike for May 2020 is a mere aberration, possibly an effect of the Bitcoin halving. 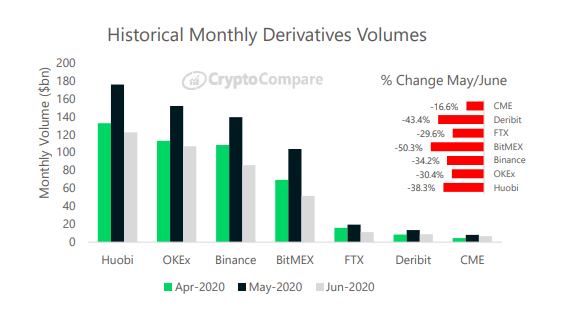 CryptoCompare also reported that the maximum daily trading volume in June occurred on the 1st, at $23 billion. On that day, Bitcoin nearly breached past $10,500, but it did not.

Analysts have noted that the lack of volatility is affecting exchange volumes. After almost reaching $10,500 at the start of the month, Bitcoin seemed to be on a weekly decline in the price range. As of today, the world’s largest cryptocurrency is trading within the $9,000 – $9,300 range.

Finally, the research found out that while CME’s futures volumes have decreased by 23%, its options volumes have reached an all-time monthly high of 8,444 contracts traded. Also, the decrease in the futures volume is less significant than other exchanges. It should be noted that many institutional investors are trading on the regulated Chicago Mercantile Exchange.

This is positive news to those who think that institutional adoption is key to mass acceptance of Bitcoin. This is the sentiment shared in the recently published Crypto Report from Bloomberg analyst Mike McGlone, who stated that lesser volatility will bring more institutional investors into the space.

OKEx, the largest digital assets exchange platform has achieved yet another milestone with the CryptoCompare Exchange Benchmark report placing it among the top 10 cryptocurrency exchanges in the world...
Read More

Deribit is Dominating Bitcoin Options With 78% Market Share: Here’s How They Did It

Deribit has been the most dominant force in the Bitcoin options market throughout 2020. With a 78 percent market share, no other competitor is close to reaching similar levels of volume and open inter...
Read More

Chainlink’s Unstoppable Rally Has It Dominating These Top Crypto Exchanges

Chainlink has the entire cryptocurrency standing at attention and taking note as the asset enters price discovery mode and sets new high after high. Along the way, the superstar altcoin has stolen the...
Read More

Binance recorded the highest gains in spot trading volume while Huobi Global topped the derivative crypto markets in August, with high gains recorded across all major exchanges. Data compiled by B...
Read More

Bitcoin investors have been accumulating the digital asset at a rapid pace throughout the past several days and weeks, with the cryptocurrency seeing massive inflows of capital in August while its pri...
Read More